LEVITATE OPENS THE DOOR OF THE FUTURE

Magnetic levitation lift and slide system:
“windows and doors as heavy as a feather”

Lifting large-sized, sliding doors from their track and making them flutter in the air without the use of electric motors, but by exploiting the principle of magnetic levitation is now possible. The innovative Levitate system which Brombal previewed at the International Builders’s Show in Las Vegas will be available for all types of sliding doors and windows, even large and heavy (up to 1000 kg) ones, starting at the end of the second trimester of 2020.

The doors flutter in the air thanks to magnetic levitation

Levitate, with its special configuration of passive magnets for lifting heavy weights, frees the frame of the weight of the door with minimum effort, making the movement of the door very smooth, as if in absence of gravity and only slowedown by the inertia of its weight. The system works manually with a simple turn of the door handle, which activates the levitation and a slight push opens the door or window, held up by magnetic forces. To secure the panel and engage the weather tight seals and locking system simply rotate the handle again. “Levitate stands out for its greater ease of movement because it is as if the door floats,” explained Massimo Valentini who follows the production of doors and windows with the Levitate system in Brombal.
“Compared to a traditional sliding door on wheels, the force necessary to move a sliding door with magnetic levitation system is ten times less. For example, if the force necessary to open a one-thousand-kilo door is between 30 and 40 kg when being pulled, the force to open a sliding door with magnetic levitation system is around 3,5 – 4 kg.” 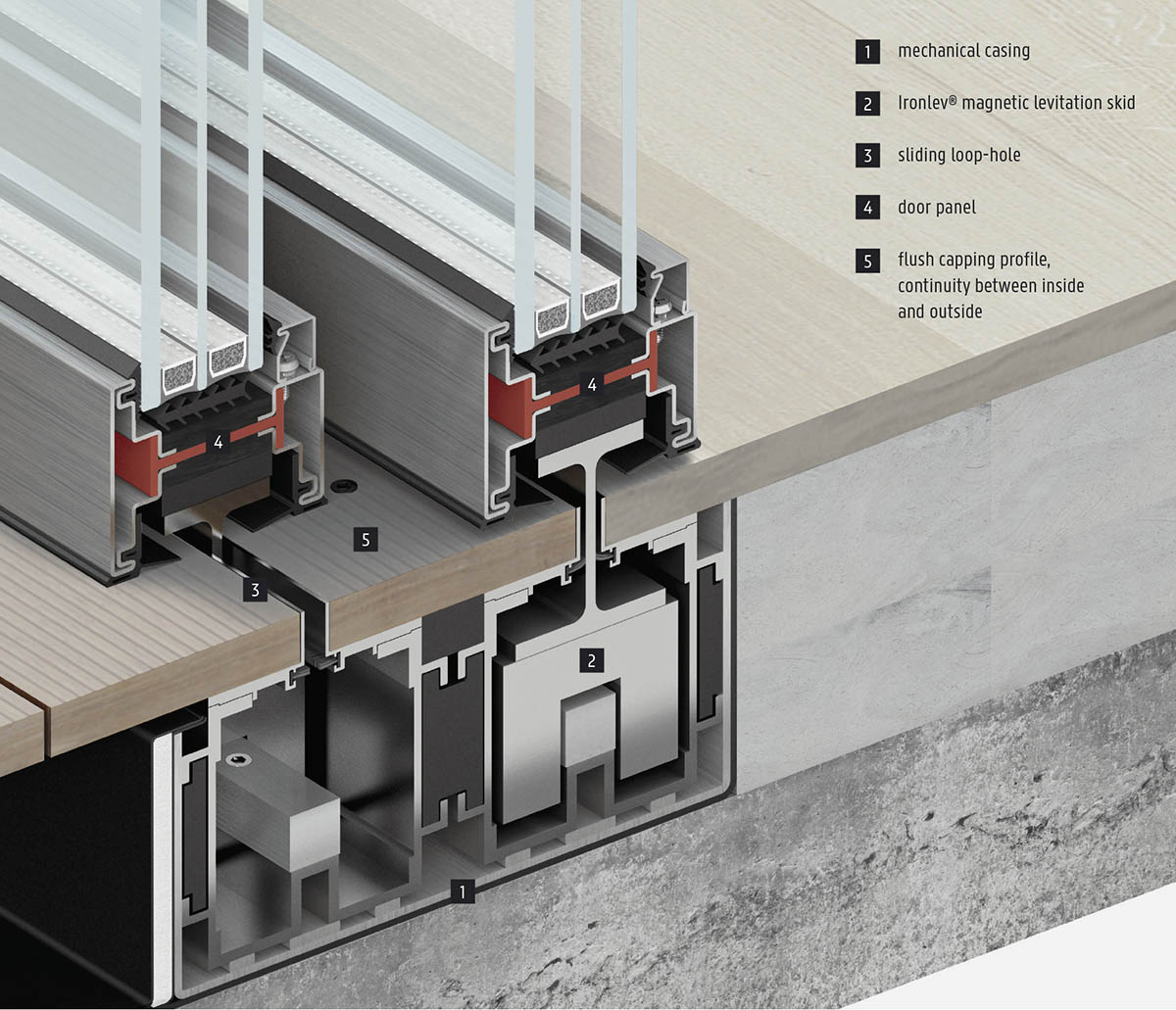 From a performance perspective, one of the advantages is consistent functionality. “While a traditional sliding door is subject, in time, to the inevitable wear of the wheels, tracks and bearings, with Levitate there are no parts bearing the load of the weight thus guaranteeing major fluidity and reducing friction to a minimum.” The levitation system, composed of patented magnetic tracks and rails, is concealed in the floor.
The aesthetic elegance of the system enhances the transition between interior and exterior space.
On the superior track, Levitate is equipped with mechanisms that are activated when the door has to be lowered, thus countering the lifting push of the magnets and guaranteeing seal and closure. To give our clients every possible option, it is possible to install and activate a mechanism to make the panel slide automatically when it is lifted. Brombal is also working on a completely automated system which will lift the panel and make it slide with only one touch. With Levitate, opening a large-sized door becomes revolutionary because it is as “light as a feather”. The future in Brombal is today. 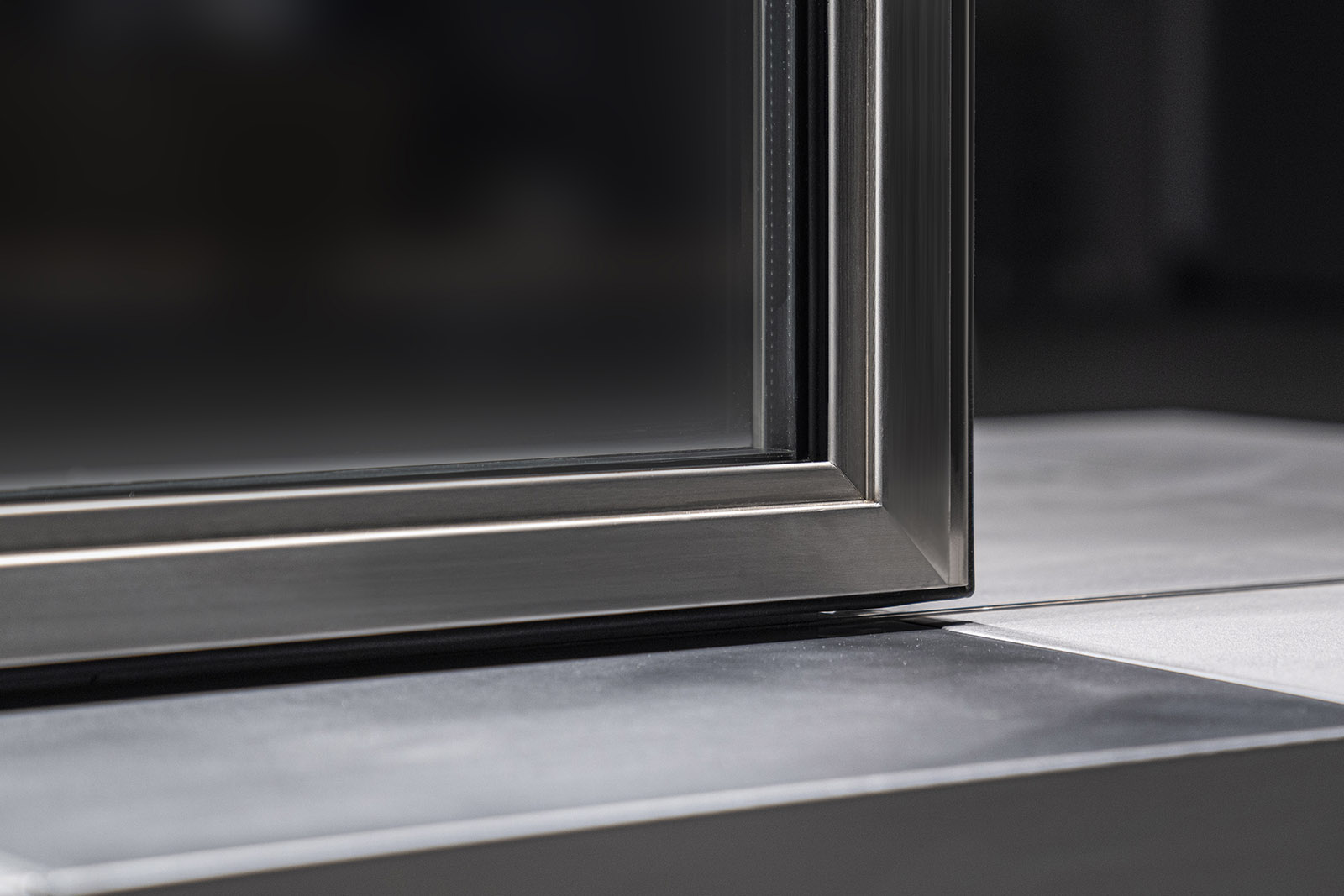 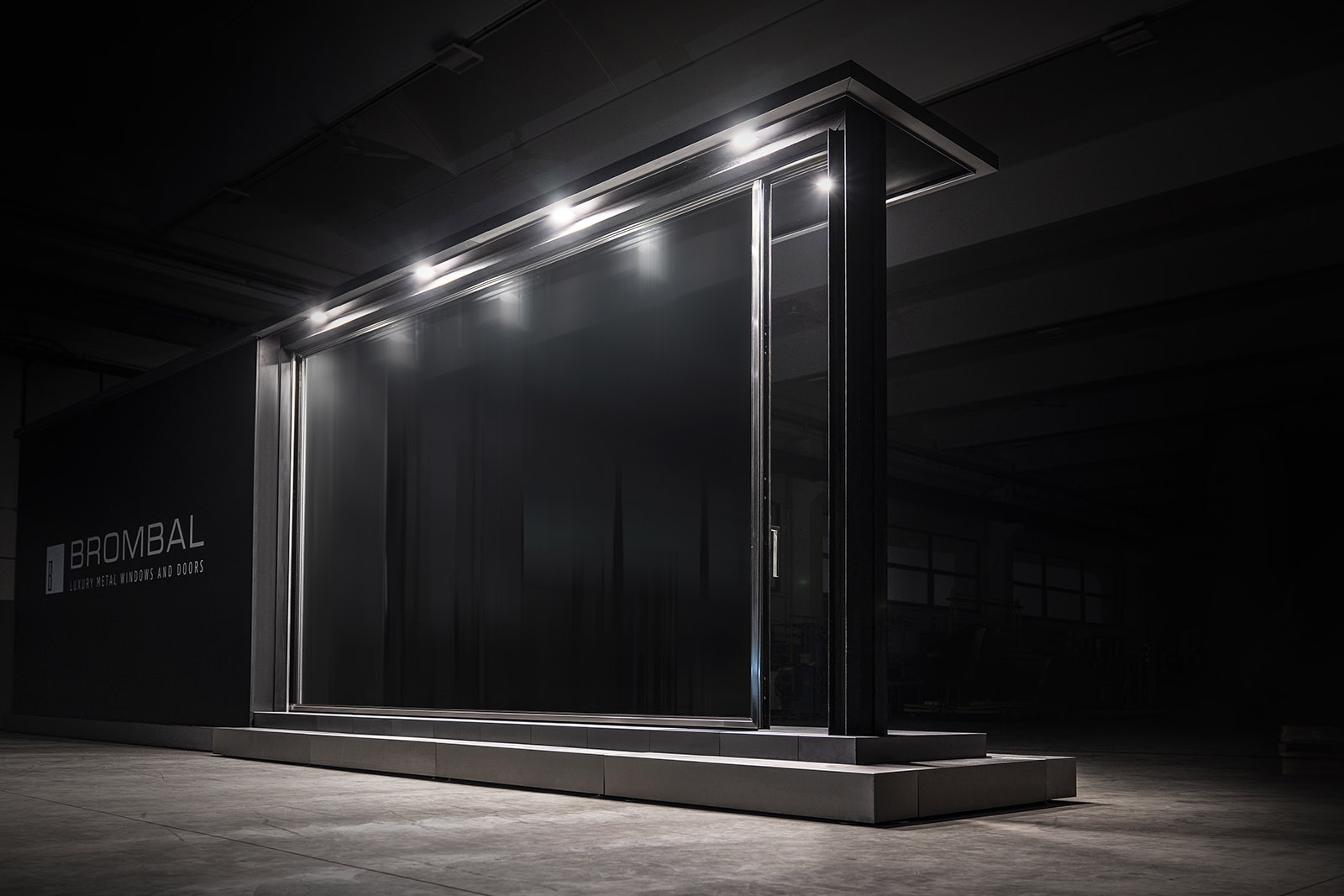 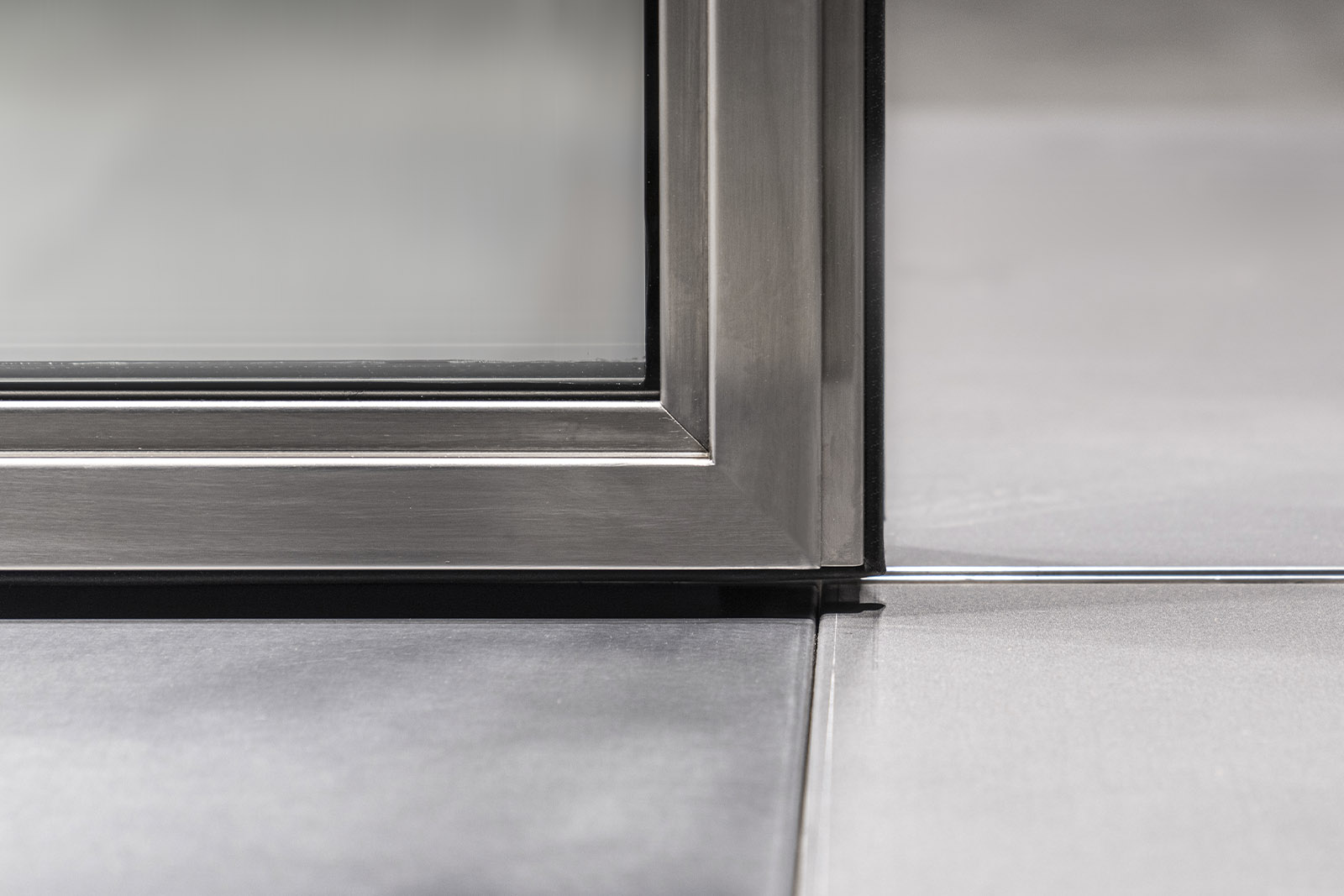 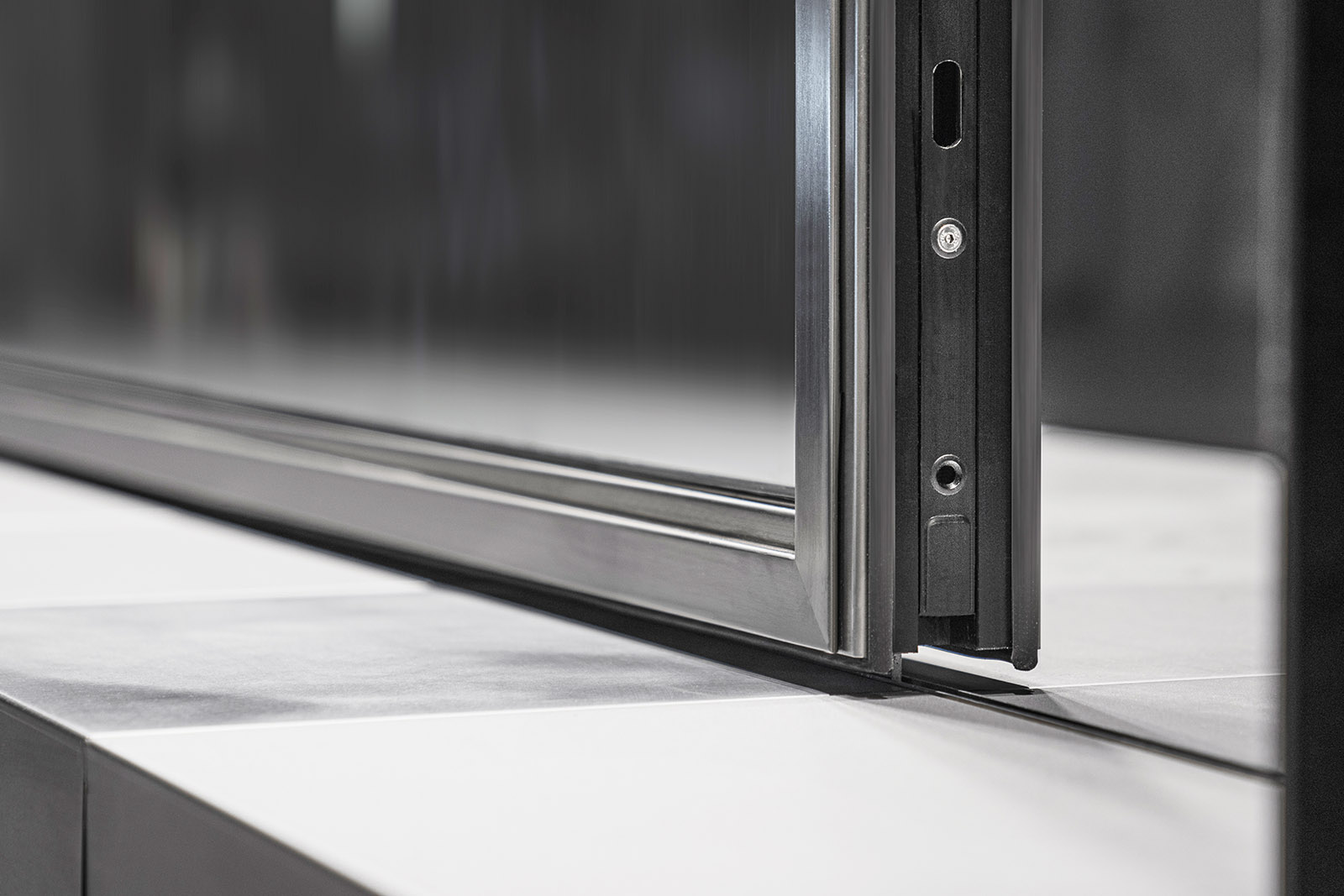 To learn more about our magnetic levitation lift and slide system, visit Levitate Page. Contact us for custom, zero gravity thermally broken Steel and Brass windows and doors by Brombal.