“Architecture is evolution, not revolution” with these words Tom Kundig, co-founder and head of design of the well-known Seattle-based studio Olson-Kundig, introduces himself.

Internationally known for its bold but balanced architectural style, it stands out for the great synergies created between the interior and exterior of the rooms, as well as for the attention paid to the evolution of materials over time.

In fact, in his projects, he often leaves the materials in their natural state, so, that, they can evolve and change through the interaction with the different elements they will encounter, such as weather, human beings or just the simple flow of time.

The relationship existing between the inside and outside of the building is fundamental for him: the natural landscape is not an element in competition with his architecture, but, instead, the environment in which to enter and merge.

Hence the great attention and careful studies of structures in continuous dialogue with nature, in strict relation with the established use of large windows equipped with unique mechanical systems for their movement.

These devices, called by himself Gizmo, were the turning point of his career. The request received to open an entire side of a building in one of his projects, allowed him to engage with and study this movement mechanism that now distinguishes his work so well.

His idea was born in wanting to find a mechanical counterbalancing system that, through a series of gears with the lowest possible technology, would make the movement of the window frames possible with just a minimum input of force.

This initial act with a high aesthetic potential, requires necessarily a physical involvement of the user who, thus, becomes an instrument of interaction with his own architectural space, where buildings are no longer exclusively immobile, but an active part and moreover fulcrum of the architecture-movement-landscape link.

The action which leads the viewer to the vision opening up, combines the poetic imagination that frees itself, with the rules of the system’s movement technique. 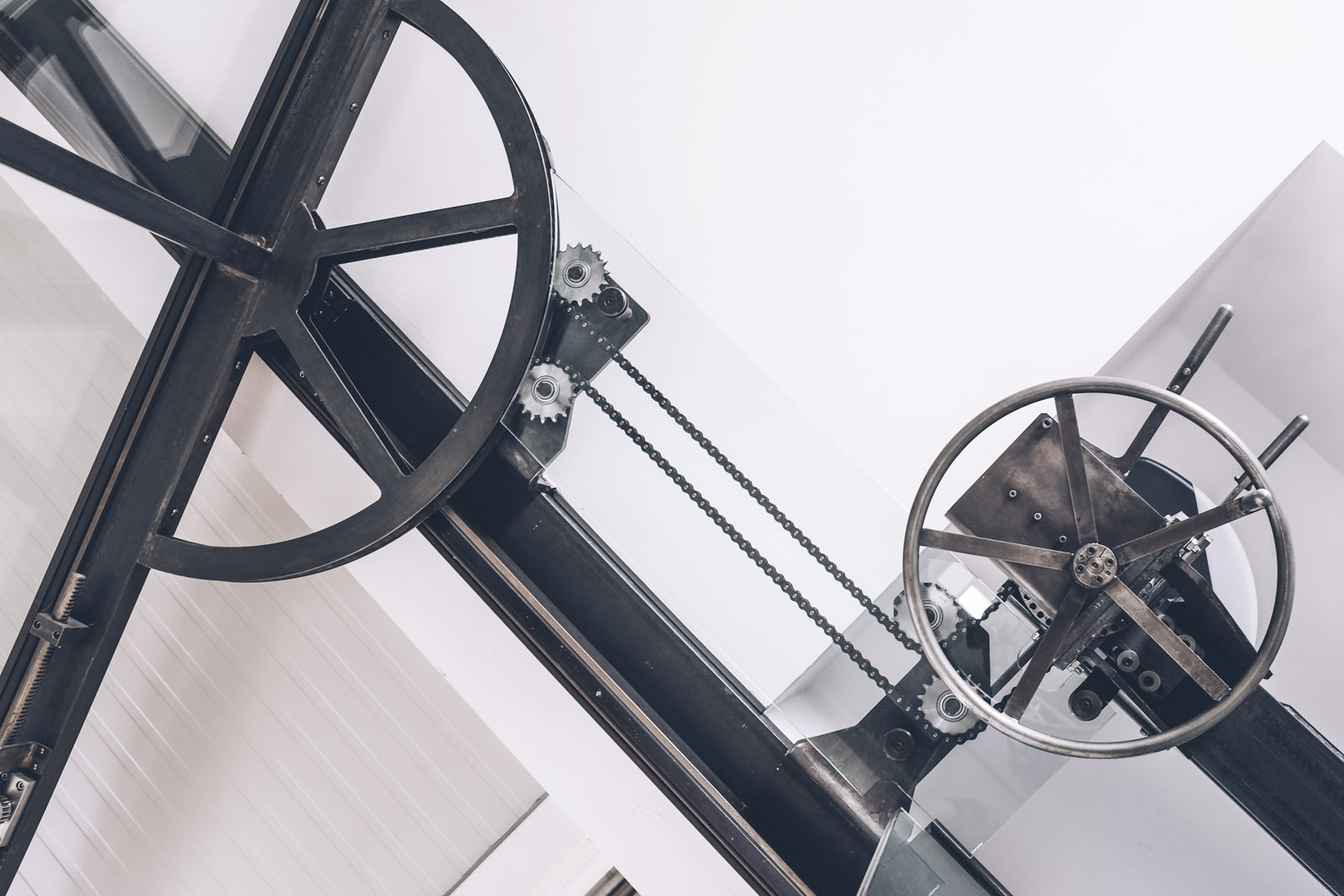 The expressive potential of this device, almost completely exposed to view, only in appearance technically and aesthetically out of history, retro, it’s instead highly contextualised by Tom Kundig thought: in fact in a hyper-connected world where the rules are dictated by digital innovations with specific focus on interaction, immediacy and increasingly minute and hidden mechanisms; keeping this mechanisms and gears in open view to bring forward their interaction with it, makes of Gizmo a timeless product, becoming in fact mechanical sculpture, a true work of art.

Through Gizmo, with minimal force objects are manoeuvred beyond human physical possibilities. The force reduction system and the devices, run all movements preventing sudden impacts or vibrations, allowing a perfect control of the window frame opening and closing.

Kundig in the search for ever greater performance, crosses his path with ours, asking us not just to produce his idea but to improve it as well: thus a device superior to those produced so far is born, thanks to the great energy efficiency of the thermal insulation and to a superior water and air resistance.

To achieve all this Phil Turner, Tom Kundig’s designer, makes available his experience in this kind of engineering and meets Brombal engineers in Italy to create together the best Gizmo ever. 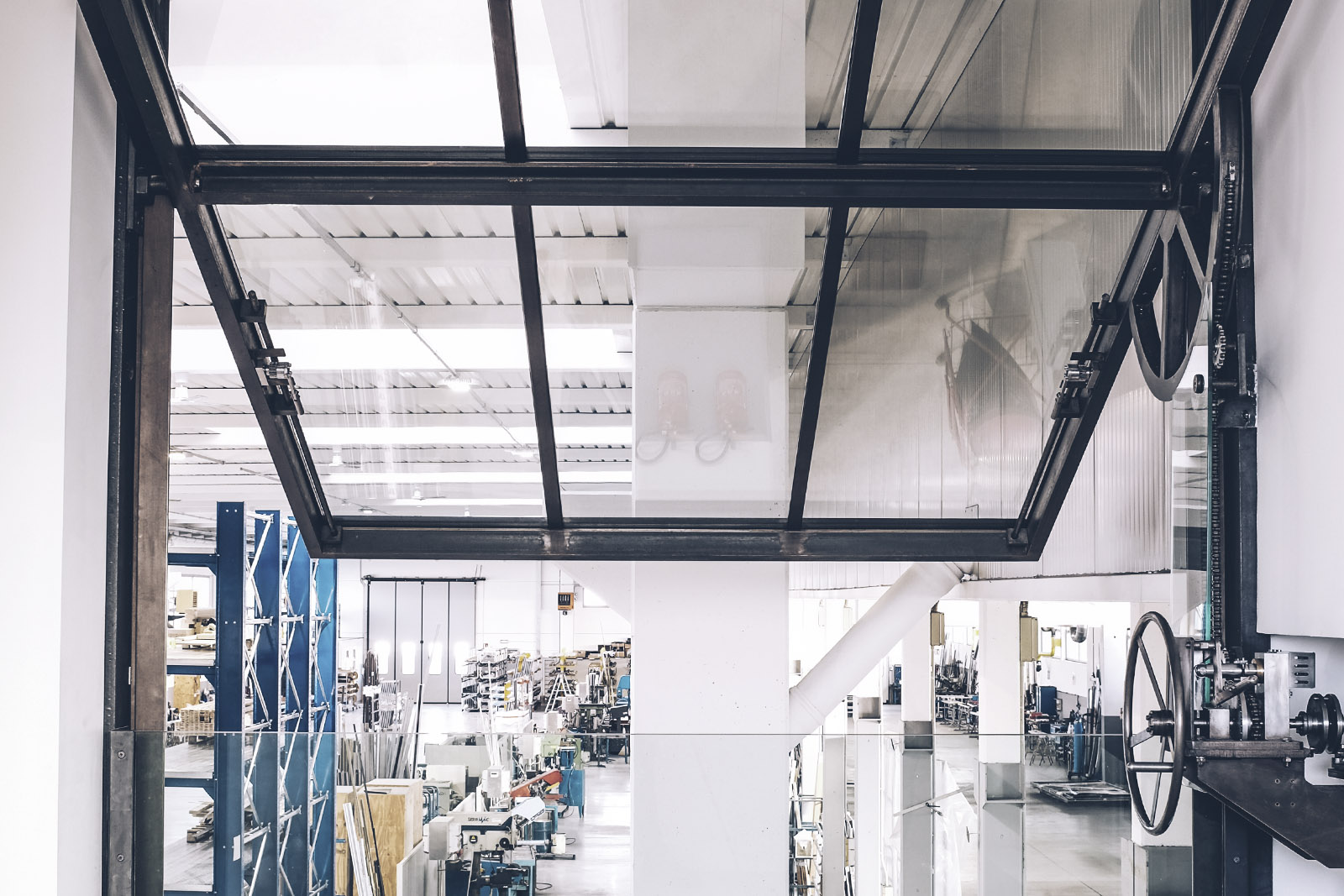 The uniqueness and exclusivity of Gizmo it’s essential characteristic of luxury architectural construction, where this piece of art and the quality of the materials used in the windows, make them recognisable icons of high prestige.

The possibility of opening to a limitless view by easily moving large windows through the interaction with the surrounding architecture, puts the user in the position of no longer being only and exclusively a visual spectator of the surrounding spaces, but to set itself up as an active part of the landscape and the structure itself.

Ultimately, with Gizmo, the special relationship between landscape, architecture and human being, leaves to suggestions and imagination the freedom to go far beyond the physical limit of the structure.